1999 Tahoe 4x4 wrote:
I wonder if it would help if tuner companies moved their production out of the country.

That's the way a certain company in NZ does business (or used to, I haven't kept up with them for several years now). They sell "un-activated" hardware into the US that meets the standards and depend on the selling dealer to download and "activate" the hardware. It is actually quite smart and places the hit directly on the selling dealers, since they are the ones "creating" the emissions defeat software loaded device.

If the EPA decides to go after the "manufacturer", that would be the "dealer" since they are "assembling" the final device here in the US.
Top

My 2000 Silverado has finally pissed me off to a point beyond redemption. Last year it blew a power steering hose, which was the final straw. I think I've only used the truck twice in the last 10 years as a truck, that didn't result in the truck breaking in a manner requiring a tow truck. I've put enough money into it to buy a new top of the line truck and it's in worse condition than it was when I bought it. No more, I've had it. The truck is gone. I've replaced it with a 2003 Dodge Dakota ext cab 2WD. It may be a Dodge, but it's already cost me less and been more reliable over the last 6 months than the Silverado. May the Silverado like its next owner more than it's liked me.

Sometimes, a vehicle just isn't going to like you no matter what.

Before anyone asks, my mother's truck needed renovating so all the good parts from my truck have been transplanted to her truck and all her worn out parts were transplanted to my former truck before selling. I didn't actually give up anything on the old truck, and I don't mind giving my mom thousands in new(ish) parts with almost no miles on them.

So far as the Dakota goes, a Chevy LS engine apparently bolts in like it was made for the Dakota. Hur hur hur... Now to find a 2015 Camaro SS 8 speed at auction...
Top

Pics of the new truck?
Top

Nope. I bought it, then gave it to my mother to drive almost as soon as I bought it. Looks like this though. I'll be getting it back after I finish with her truck. 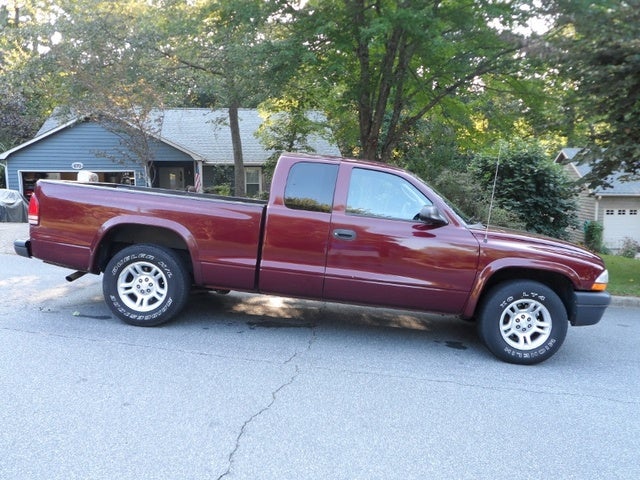 Nice! Good solid looking truck. I was very happy with my Ram when I got it. Gave me a lot fewer problems than my Suburban, and honestly was more fun to drive because it was a manual.
Top

Yeah, I liked driving it the day or two I had it, but it's an auto. Unfortunately I injured my left leg about 15 years back requiring surgery 10 years back, and now I've done something to my right shoulder. My work car is a stick, and it's getting to be too painful to drive so I'm afraid it's going to be autos for me from now on.

This one will be what my S10 was supposed to be, a forever driver. Only this time, I won't be trying to drive and build, and when it's finished it'll be insured for value, not for make/model.
Top

I'm not dead, just busy with work. Still working on my mother's truck and my gentleman's farm in my spare time. Sometimes I go days without getting on my laptop, and my new workplace is not as friendly about non-work cruising. I haven't made a final decision on my Dakota but the front-runner on this is a 5th gen LT1 with an 8 speed auto. I also plan on performing a little... experimentation... on this project. I'll only detail THOSE when the experiments are complete.
Top

Speeder wrote:I also plan on performing a little... experimentation... on this project. I'll only detail THOSE when the experiments are complete.

This sounds like it will be fun to watch!
Top

That moment when you realize you forgot to install the crank reluctor ring, but the engine is fully installed and ready to start.

CrazyHoe wrote:That moment when you realize you forgot to install the crank reluctor ring, but the engine is fully installed and ready to start.

CrazyHoe wrote:That moment when you realize you forgot to install the crank reluctor ring, but the engine is fully installed and ready to start.

Oh yes it did!

The problem is I did a partial assembly last year knowing I would't work on it during winter.

In a rush this spring to get the engine ready with new front cover and Morosso oil pan, I took for granted that everything was there as the balancer was partially on to keep the dust out.

The crazy thing is, I dropped a roller rocker on the floor while I was adjusting them, engine already bolted on, (I wanted all valves closed during winter)

Got the rocker cleaned and I could have used any oil bottle at hand. But no, I went to the back of the shed to get the bucket full of oil that I used to dunk my parts in during assembly...

And there it was, at the bottom of the bucket, the reluctor ring.

Had I not gotten that bucket, it would have taken me for ever to figure out why the truck didn't start.

Why that was forgotten, I can only blame exhaustion an a rush to leave to do something else.

It was a dark and stormy night. Suddenly, a shot rang out! CRACK! There was a single victim, namely the ethernet port on my router. My microwave internet still worked, if you plugged directly into it. My router still worked, all my devices could talk. Anyway, I'm back courtesy of a new router. Weird that lightning would take out the ethernet port on my router, but not fry anything else at all including the microwave radio mounted to a 50 foot tall telephone pole.
Top

My mother's truck project is finally done, yay. Now I can start on my own stuff.
Top

Speeder wrote:My mother's truck project is finally done, yay. Now I can start on my own stuff.

Speeder wrote:My mother's truck project is finally done, yay. Now I can start on my own stuff.

Great! Now you have time to come and help me finish mine

Prayers for HQuick in Australia

Nothing specific that I know of for him but Australia is freakin burning.
It was said in the news that an estimated 1 billion koalas have died

well, the fires were widespread and I think the burb has passed on, but the big guy is still kicking...so to speak...Howard is alive and well and still busy doing his renos on his place
Top
Locked
832 posts

Return to “Side Garage”